The Downtown Bettendorf Organization (DBO) will once again present its “Be Downtown” event from 9:30 a.m. to 10 p.m., Saturday, June 5, in downtown Bettendorf. Located in the City of Bettendorf’s parking lot at 15th and State Streets, this free, family-friendly event will feature multiple bags tournaments with cash prizes, live outdoor music, food and drink vendors, children’s activities and more. Patrons are encouraged to bring a lawn chair.

The day kicks off at 9:30 a.m. with 1031 Fitness presenting a free 45-minute high-intensity training (HIT) workout. Afterward, the K&K Family Fun Zone will be set up with food trucks, bounce houses, face painting and other family fun provided by the Bettendorf Library. Food and beverages will be available for purchase from vendors Capriotti’s, CC&B Mobile Food, Here’s the Scoop and QC FUEL. Verde, a new, contemporary Mexican restaurant located at The Bridges, will offer food and an outdoor bar for alcohol and other beverage sales.

Be Downtown will feature three separate bags tournaments at 11 a.m., 2 p.m. and 4 p.m. Each tournament will award cash prizes for first ($300), second ($150) and third ($50) places. Participants may sign up online in advance or via a QR code (right). There is no cost to enter. Check-in for each tournament is one hour prior to its start.

Beginning at 11 a.m., live music will be provided in two-hour sets throughout the day by area bands Been There Done That, Class of ‘82, Threat Level Midnight, and Rude Punch. Late night live music will continue at Harley Corin’s with Daylight Over.

Parking for the event will be accessible at multiple lots in downtown Bettendorf, including:

Additional event details can be found on the DBO Facebook page.

Been There Done That 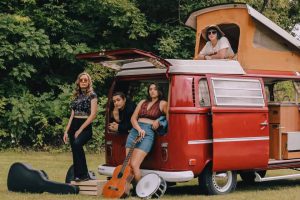 Been There Done That first embarked on their musical voyage of discovery together as a cohesive Rock Band in 2016. But their origin goes back earlier to when the band members grew up listening to a variety of music genres that played an influential role in shaping their paths as musicians and ultimately led them together. As Been There Done That, they have collectively found their signature sound, and offer something different and unique to their fans by creating and sharing original music they are proud to call their own. 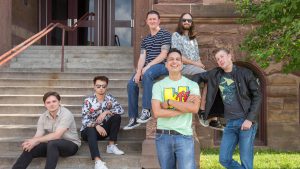 If you’re a fan of music from the 1980s, get ready to celebrate and dance to some of the great synth-pop music from the Quad Cities brand new music group, Class of ’82. The group formed in 2016, and have been rehearsing and preparing music from the bands that have influenced their taste in music from the 80s.

Victor Leon is the lead vocalist of the band, drawing his influences from Dave Gahan from Depeche Mode and Bono from U2.Bryce Swanson (from Soul Storm) is on guitar and backing vocals, laying down the rhythmic and solo lines, while Devin Alexander (from The Post Mortems) is on bass guitar and backing vocals. This band features not one, but two synthesizer musicians to give it a true 80s synth-pop sound. Zack Johnson (from Soul Storm) and Zach Metzger (formerly of Remedy) provide the synth sounds that will open the nostalgic memories for all the iconic and influential songs from the era. Josh Duffee, known for performing Bix-era jazz music from the 1920s-40s, is the drummer for this band. Instead of a vintage drum set, he performs on a unique electronic kit to give the band a true retro sound, as well as an acoustic kit.

Class of ’82 focus heavily on the synth-pop era bands of the 1980s. The songs being covered range from one-hit wonders to the more obscure songs that not too many people have ever heard before. In addition to all the songs they are covering, they are also writing their own originals in the same style to slowly add to their list of songs being performed at each show.. The band will perform songs made popular by bands like Depeche Mode, Tears for Fears, Duran Duran, Alphaville, Erasure, China Crisis, Men Without Hats, Flock of Seagulls, Naked Eyes, Kajagoogoo, Wang Chung, Talking Heads, and many more!

Spanning six decades of music, Threat Level Midnight has something for every rock enthusiast! From Elvis to Foo Fighters, Eagles to Audioslave, the Cars to Red Hot Chili Peppers, TLM’s deep library of covers will keep everyone entertained and guessing what song comes next. Led by Princeton’s own, Cale Bowe, TLM is a 4-piece band from the Quad Cities that will keep you dancing and singing all night long to favorites and forgotten gems. 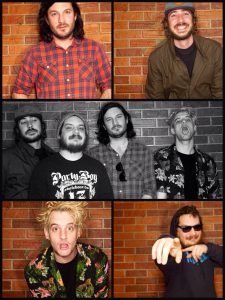 Formed in 2007 by Brady Jager, Adam Tucker, and Robb Laake, the trio formed their own sound based in the reggae/rock genre. Heavily influenced by bands such as Sublime and 311, early pioneers of mixing reggae with punk,hip-hop, funk and rock.

The band released their debut album “Rude Punch” in 2007. Spreading the new sound across their home Midwest region, Rude Punch were the lone ambassadors for their style. Sharing the stage with industry leaders such as Slightly Stoopid, Pepper and Sublime with Rome, Rude Punch saw their popularity continue to grow with the genre.

With the release of “Killin’ It” (2009) and “Lovers Rock” (2015), the band continues to spread the love and positivity of their music throughout the region and U.S. With the addition of bass player Jack Hill in 2015 and Murray Lee Rice in 2018 Rude Punch enhanced their sound even more.  The four piece lineup has proven to be the best fit for the band, expanding their influences and building their following in the reggae/rock genre.